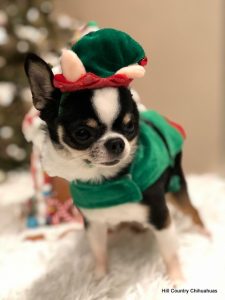 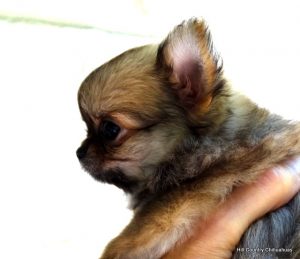 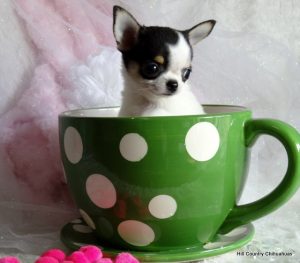 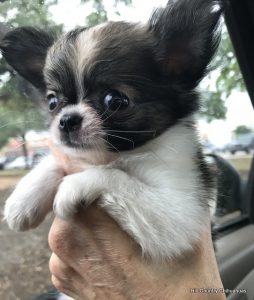 Historically, the Chihuahua developed in Mexico and the United States has displayed a “soft spot” on the top of the head. In the Chihuahua this spot, or fontanel, is known as a MOLERA; and is the same as that found in human babies. In the past, this molera was accepted as a mark of purity in the breed, and it is still mentioned in most Chihuahua breed standards the world over. It is important to note that while many Chihuahua puppies are born without the molera, there are probably just as many born with one and its presence is nothing to become alarmed over. As shown in the illustration below, the molera in a Chihuahua will occur on the top of the head and may vary in shape and size when present.

Unfortunately, many lay people and some veterinarians not familiar with the Chihuahua have tried to link the mere presence of a molera with the condition known as hydrocephalus. This has caused many new-comers to the breed serious concern and undue worry. The truth is that a domed head with a molera present does not predispose the Chihuahua to this condition. Along with the observations of devoted breeders over the years, there is adequate medical evidence to support this statement.

While it would be impossible to list all the medical documentation here on this page, these few included here are perfectly clear; the presence of a molera does not mean the Chihuahua has a medical problem. The Chihuahua is a little dog! They belong in the house, at their owner’s side, receiving all the love they deserve to receive. With or without a molera, the healthy Chihuahua that is loved and given proper veterinary care will live well into its teens as an irresistible member of the family.  Quoted from The Chihuahua Club of America, Inc

“The molera, or open fontanel, is a common trait in many well-bred and healthy Chihuahuas.  It can be felt as a soft spot of various sizes on the top of the dog’s head.  It is actually where the frontal and parietal bones of the cranium, which usually fuse soon after birth, remain unfused instead.  In most Chihuahuas, the bones continue to fuse somewhat as the dog matures.  By the age of one and one half years, only about 16 percent of moleras are closed.  Eventually about 50 percent close although this may not occur until three years of age.  Only a small percentage of moleras remain large.  So much has the molera been associated with the Chihuahua that in years past, the purity of the Chihuahua without a molera was suspect.  More recently, the molera has been blamed for the occurrence of hydrocephalus in the breed.  Many veterinarians, upon seeing a puppy with a large molera, express their concern about the pup’s future health.  Fortunately, research has since demonstrated that a molera of any size does not predispose the Chihuahua to hydrocephalus.  Veterinary neurologist have stated that the presence of a small molera is not a detriment to good health.”  Quoted from “The Chihuahua Handbook” by D. Caroline Coile, Ph.D.

“Head and expression define every pure-bred.  We recognize a Bloodhound by his sad expression.  A Bulldog is immediately identifiable as a “sourmug.”  The Chihuahua will be recognized by the apple-shaped head that is totally contrary to the natural rectangular shape of the canine skull.  The large head presents a bit of a problem in whelping, but Nature’s wise design allows the skull bones to flex as the whelp passes through the birth canal.  In most mammals, including humans, the bones harden and knit together soon after birth.  In the Chihuahua, there remains a small gap or molera in the top of the skull where the bones fail to join.  The presence of the molera dos not harm the dog.  It is, however, unique to the Chihuahua dog, and it is significantly baby-like.”  Quoted from, “Chihuahua” A Kennel Club Book, by Barbara J. Andrews 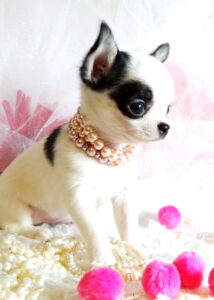 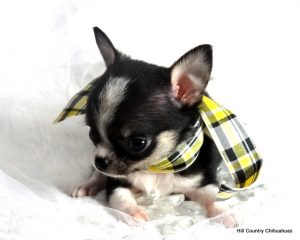 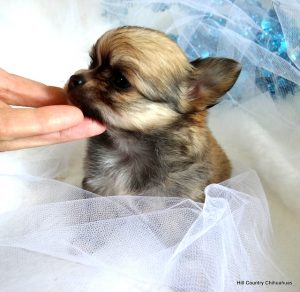 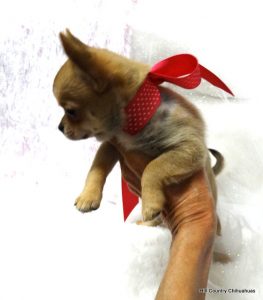 “The Chihuahua’s molera (a.k.a. fontanel) is considered a breed characteristic and not a defect.  Most Chihuahuas (80 percent to 90 percent) have a molera- a soft spot on the top of their head similar to a human baby’s soft spot.  But unlike babies, most Chihuahuas don’t outgrow it.  Although it usually shrinks as the dog matures and ends up between nickel-and dime-sized, Pepe’s molera won’t be a problem as long as you’re gentle when petting or handlings his head.”  Quoted from “Chihuahuas for Dummies”, by Jacqueline O’Neil.

“Historically, the Chihuahua has displayed a “soft spot” on the top of the head.  This spot, or fontanel, is known as a Molera, and is the same as that found in human babies.  Some of these soft spots close completely as your dog matures; others remain small and are not detrimental to your dog.  In the past, the molera was accepted as a mark of purity in the breed.  A domed head with a molera present does not predispose the Chihuahua to hydrocephalus.” Quoted from The Chihuahua Club of America, Inc. 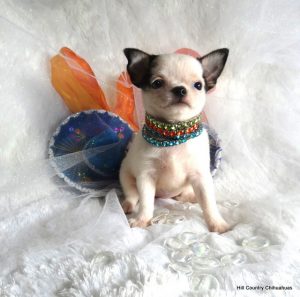 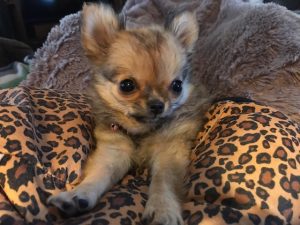 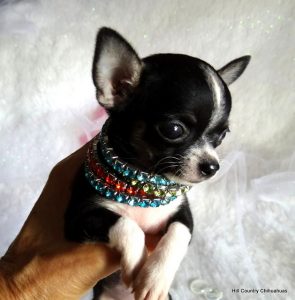 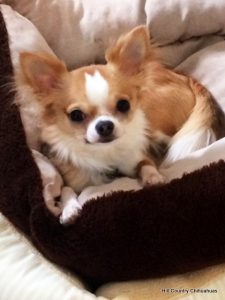 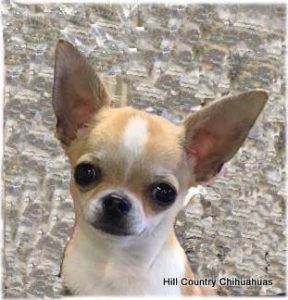 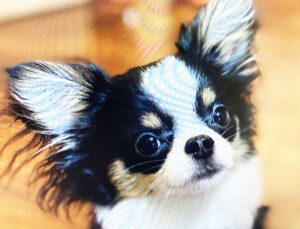 The American Kennel Club mentions the molera in the Chihuahua breed standard.  It is a soft spot found on the top of the head, much the same as is found on a human baby’s head.  It is important that new-comers to the breed understand that this is found in nearly all apple head Chihuahua puppies.  It is normal for the breed and although most of the times it closes, sometimes it will never close completely.  Before breed registries existed the molera was a strong indication that the puppy was, in fact, a pure breed Chihuahua.  Before you take your new puppy home and to your vet for that first well check to establish service, please educate yourself about this breed characteristic.  Many vets understand the Chihuahua breed and will note the presence of a molera in their write up.  However, some vets, not specifically familiar with the breed, can alarm customers needlessly. We cover the topic of the molera in our phone consult which we schedule prior to your very important puppy pickup visit.  Below we have shared some helpful and educational links about this subject.

“The molera, although curious, is of no advantage, but it is still to be found in most Chihuahuas, although less frequently in the long coat variety.  Generally speaking, the smaller the Chihuahua, the larger the molera, and occasionally, there are several moleras in the skull.”  Quoted from the book, “The Guide to Owning a Chihuahua”, by Roberta Sisco.

What is a Molera or ‘Soft Spot’ in Chihuahuas?

We primarily breed for the apple head.  Therefore, nearly all of our puppies will have a molera when they go home.  We have noted through the years that some vets are not specialized in the Chihuahua breed and alarm customers needlessly about the presence of a molera in their new puppy.  Please, do not be alarmed, educate yourself and if necessary take in a copy of The Chihuahua Club of America statement of the molera to your vet appointment.  Ask other Chihuahua owners in your area and hopefully you can locate a veterinarian that specializes in the toy breed, especially the Chihuahua. Visit our Veterinary Recommendation page for assistance.  An educated pet owner is a good pet owner. 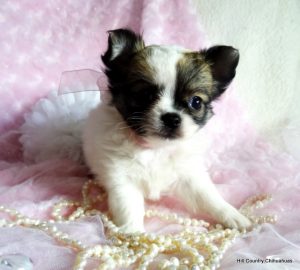 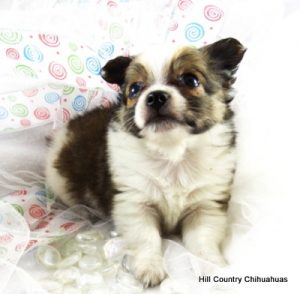 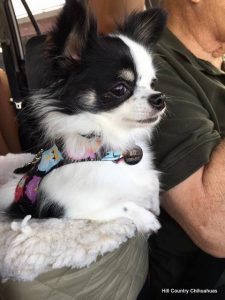 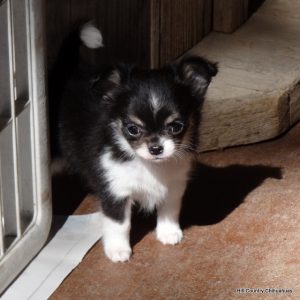 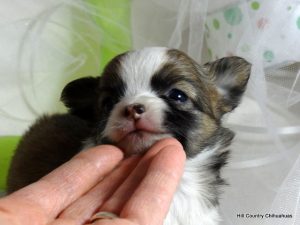 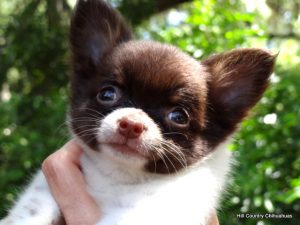